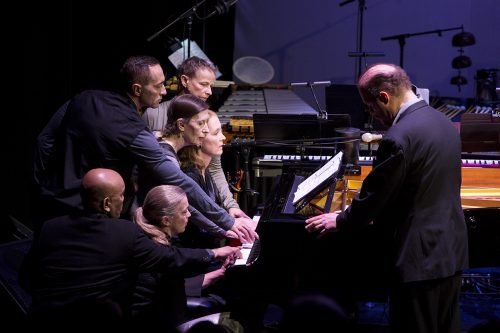 Meredith Monk’s visionary fusion of sound and movement is as daring now as it was when she debuted over 50 years ago. Her influence on musicians both in and beyond the world of classical composition can be felt in the work of artists as varied as pop icon Björk, jazz experimentalist John Zorn, and innovative electronic composer DJ Spooky. This historic concert includes selections from several of Monk’s more recent works — On Behalf of Nature, impermanence, and mercy — alongside classics from earlier decades, offering an expansive view of Monk’s 50 years of making music. Of particular significance is that most of the people interpreting these works are those who performed them originally. Meredith Monk is joined by the extraordinary vocalists and instrumentalists who make up her ensemble.

“Monk has mapped a world that never quite existed in the history of the arts. At once visceral and ethereal, raw and rapt, her works banish the spurious complexities of urban life and reveal a kind of underground civilization, one that sings, dances, and meditates on timeless forces.” — Alex Ross, The New Yorker